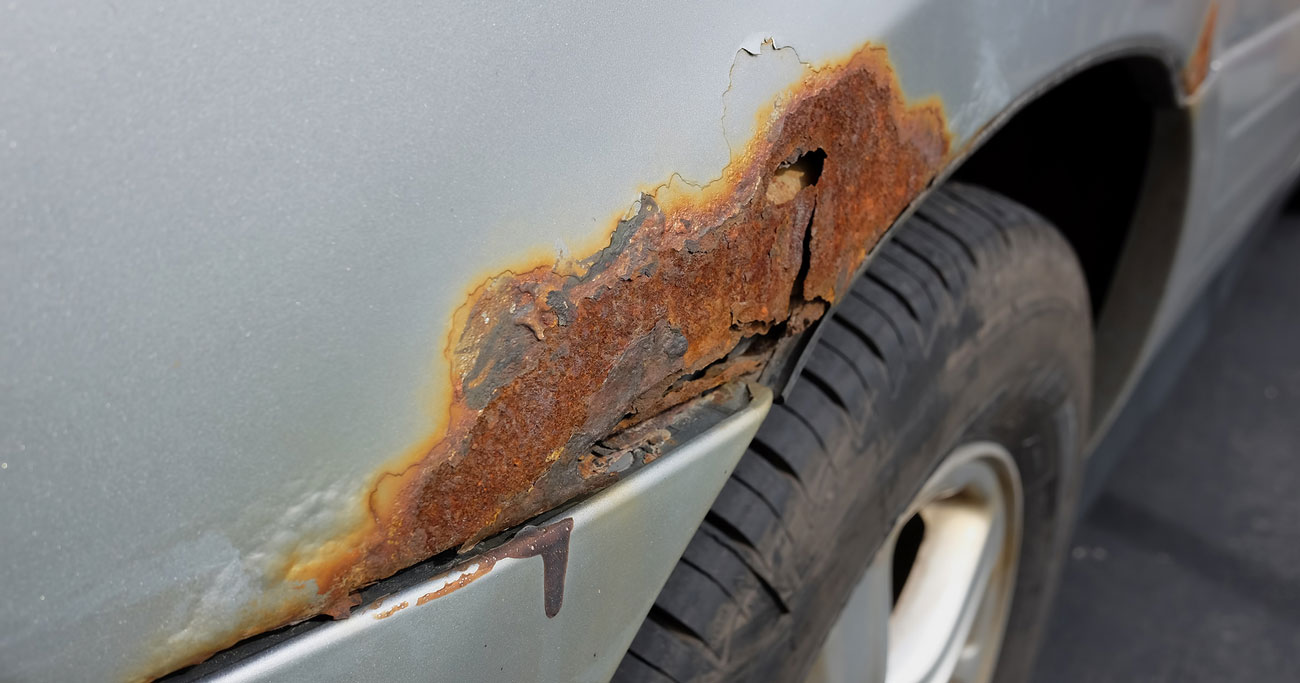 There are many telltale signs that your car may be under attack from rust, including bubbling paint, brown stains, and wet floors. Rust has cause the premature deaths of many otherwise healthy vehicles, but fortunately, rust is a preventable issue. Car manufacturers use coatings and sophisticated alloys to help your car avoid rust for as long as possible, but none of these treatments are capable of withstanding rust altogether. Regular maintenance of your car is the best way to ensure its health, and understanding the rusting process is the foundation for creating a solid maintenance routine.

The best way to deal with automotive rust is to prevent it from happening in the first place. Regular maintenance, including regularly scheduled appointments with you local automotive detailing shop, is the best way to make sure you vehicle remains rust free and beautiful for its entire lifespan.

Rust is the everyday term used for the chemical reaction in which iron-based metals oxidize. You don’t need to be a chemist to understand this reaction; iron molecules on the surface of a piece of metal react with oxygen molecules in the air and produce a new molecule, Fe2O3 (iron oxide). The iron oxide molecules will flake off to reveal new surface metal, and the process continues until all the metal is eaten away. Since most car body panels are made of steel, an alloy of iron and carbon, they are vulnerable to rust.

Paint chips, cracks, and scratches are all symptomatic of surface rust. This problem is easy to fix, but can lead to bigger issues if left unattended.

Interestingly, pure iron metal doesn’t oxidize very aggressively. If you look at an old iron engine block, you will probably notice slight surface rust, but little or no penetration into the metal. This is because rust works best when it can grab on to structural and chemical impurities in the metal alloys. The steel used for car bodies boasts advantages over iron such as improved strength, flexibility, and malleability. The down side to steel is that the impurities of the alloy accelerate the rusting process.

If surface rust is left untreated, it can develop into scale.

Scale refers to rust that has begun to flake away. Scale has similar symptoms to surface rust, but they are more dramatic; large sections of paint will bubble away, body panels may be weakened, and the affected area will have a rough/pitted texture. Rust is catalyzed by salt, so cars that live in coastal areas or cold climates where the roads are salted are particularly vulnerable.

Hopefully your vehicle isn’t experiencing penetrating rust. If scale is left unattended, the body panels of your car can completely convert to iron oxide, which can crumble away altogether.

How to Prevent Rust

Car manufacturers attempt to fight corrosion by using different materials, such as aluminum and magnesium, dipping body panels in durable anti-rust coatings, applying tough undercoats, and anti-corrosion agents that are applied before the car is painted.

However, none of these strategies make your car 100% impervious to rust over its full lifetime. It is important to inspect your car for any surface damage and repair it as necessary. Use automotive primer and paint to touch up exposed bits of surface metal, pick-up truck bed liner to repair damaged undercoats, and a rust neutralizer to stop frame and subframe rust in its tracks.

The best way to deal with automotive rust is to prevent it from happening in the first place. Regular maintenance, including regularly scheduled appointments with you local automotive detailing shop, is the best way to make sure you vehicle remains rust free and beautiful for its entire lifespan.

It only takes a little vigilance to prevent rust from threatening your car’s health, but the effort goes a long way. To talk to a detailing professional about what will be best for your car, just give us a shout. The health of your vehicle is our #1 priority.